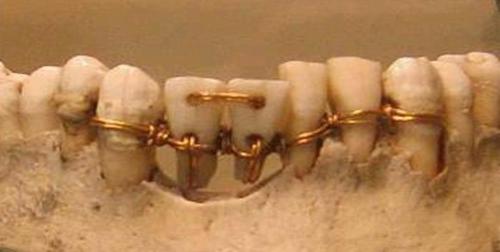 Braces are an orthodontic teeth realignment treatment that dates back to ancient eras and has developed over time! Here are five crazy facts about braces you just won’t believe!

1. Braces have been around for almost 300 years!

In 1728, Frenchman Pierre Fauchard, who was thought to be a modernist for his time, wrote the first book on Dentistry named “The Surgeon Dentist”.

The book spoke of orthodontics, and in particular, ways to straighten teeth! Fauchard discovered a device he called a “bandeau” (which we now call a mouth guard), which he thought would help teeth stay in their intended position.

Then in 1757, another Frenchman, Pierre Bourdet, who also happened to be the dentist to the King of France, wrote a book named “The Dentist’s Art” which expanded on Fauchards’ bandeau creation.

Bourdet made improvements upon the device and made the important discovery that wisdom teeth could be removed to avoid crowding in the mouth.

This discovery would go on to play an important role in modern-day dentistry, as overcrowding is a common cause for crooked teeth in adults today.

In 1819, Christophe-Francois Delabarre created the first modern braces for teeth.

His device used a wire “crib” which was placed directly over each set of two teeth, in an effort to keep them in place. In 1843, Dr. Edward Maynard added elastics to the treatment, in a bid to improve jaw alignment (similar to the elastics we have now).

However it wasn’t until the 1900’s that the term braces was widely used and accepted by the dental community and it’s patients.

2. Braces can be traced back to Ancient Egyptian times!

The very first orthodontic braces can be traced back to Ancient Egypt!

According to the American Association of Orthodontists (AAO), archeologists have previously discovered mummified ancients with metal bands wrapped around individual teeth.

Instead of the metal wire that we use now, “catgut” was supposedly used to close gaps between teeth in the BC era.

The term “catgut” refers to the cord derived from animal skin, which would be attached to teeth the same way that wire is nowadays.

3. The first braces were made out of gold!

Did you know that the original braces were made out of gold?

Fourteen to eighteen karat gold was commonly used to create wires, clasps, ligatures and spurs, which were all used in the corrective realignment process. Why gold you ask?

4. NASA created the wires that are used on modern-day braces!

In the late 20th century, NASA developed one of the most important orthodontic advances, which would change the way teeth are realigned forever.

When at room temperature, the wires are extremely flexible, and as they warm to body temperature they become active and gradually move the teeth in the desired direction.

Due to their heat-activated properties, these wires are able to retain their ability to move teeth for longer and need less attention than ordinary metal wires! Thanks NASA!

5. Braces are not magnetic!

Despite the stories and myths you may have heard, braces are NOT magnetic!

Modern-day braces are generally made from nickel-titanium alloy or high quality stainless steel.

As a magnet requires two elements- boron and neodymium- you don’t have to worry, as these elements are not found in braces!

How To Care For Your Retainers